Dr. Sanjay Kumar Madria received his Ph.D. in Computer Science from Indian Institute of Technology, Delhi, India in 1995. He is a full tenured Professor, Department of Computer Science, at the Missouri University of Science and Technology (formerly, University of Missouri-Rolla), USA. Earlier he was Visiting Assistant Professor in the Department of Computer Science, Purdue University, West Lafayette, USA. He has published more than 230 Journal and conference papers in the areas of mobile computing, sensor networks, security, cloud computing, etc. He won five IEEE best paper awards in conferences including IEEE SRDS 2015, IEEE MDM in 2011 and 2012. He co-authored a book entitled "Web Data Management: A Warehouse Approach" published by Springer-verlag. He guest edited WWW Journal, several Data and Knowledge Engineering Sp. Issues on Web data management and Data warehousing. He was founding Program Chair for EC&WEB conference series. He served as a general co-chair of Mobile Data Management conference in 2010, IEEE Symposium on Reliability in Distributed Systems in 2012 and PC co-chair of MDM 2015. He serves on steering committees of IEEE SRDS and IEEE MDM.

Dr. Madria is serving/served as PC member of various conferences such as VLDB, MDM, CIKM, ICDCS, and reviewer for many reputed journals such as IEEE TKDE, IEEE Computer, ACM Internet Computing, IEEE TMC etc. Dr. Madria has given tutorials on mobile data management in many international conferences like Middleware, MDM and SRDS. He is regular invited panelist in NSF, NSERC (Canada), Hong Kong Research Council and Sweden Council of Research. He received UMR faculty excellence award in 2007, 2009, 2011, 2013 and 2015, Japanese Society for Promotion of Science invitational fellowship in 2006, and Air Force Research Lab's visiting faculty fellowship from 2008 to 2016. He was honored with NRC fellowship in 2012-2013 by National Academies. His research is supported by multiple grants from several agencies such as NSF, DOE, NIST, AFRL, ARL, UM research board and from industries such as Boeing. He is IEEE Senior Member, served as IEEE Distinguished speaker and currently he is a speaker under ACM Distinguished Visitor program. He is ACM Distinguished Scientist and IEEE Golden Core Awardee. 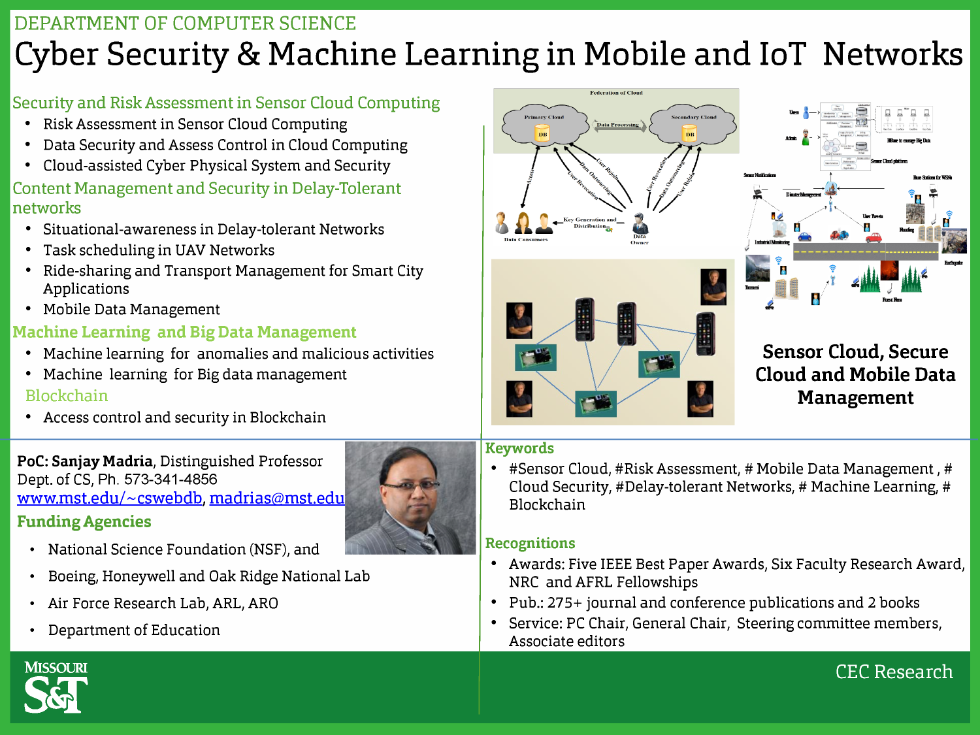 PROJECT DESCRIPTION
In sensor cloud, the security of a sensor network cannot be assessed by simply considering the feasible set of attacks in isolation. To accurately determine the security of a network, one must be able to determine the interdependencies between these attacks and how they can be exploited to execute a multistage attack on the sensor networks. These situations demand the need of risk assessment for a sensor network. Risk assessment using attack graphs will help the security administrators visualize the interdependencies between the various attacks and how they can be used in combination to cause more damage to the network.

With respect to sensor clouds which has two layers, a physical sensor network to perform the actual tasks and a virtualization of this sensor network which is hosted at the cloud platform, in this project, we will design risk modeling on both of these layers with the help of attack graphs and assess the interdependencies between the possible set of attacks on both of these layers and integrate them to assess the overall security of the sensor cloud platform. Attack graphs in a combination with principles like Bayesian networks will also help in estimating which of the given attack sets are most feasible to execute on the physical sensor layer and how that will affect the virtual layer on the cloud platform. We will also be able to determine the cost of implementing the security measures using the aforementioned principles, which will help in implementing network hardening strategies for the sensor cloud platform.

PROJECT DESCRIPTION
The acceptance of the cloud as an infrastructure to host applications is a growing trend. Facilitating and hosting applications on the cloud reduces support and maintenance costs. However, concerns about the security of these applications is one of the primary reasons organizations avoid complete adoption of cloud services. Although cloud service providers (CSPs) offer standard security, they don't address security with respect to application's security requirements. This project aims to propose an offline risk-assessment framework to evaluate the security offered by a CSP from the perspective (security needs) of an application to be migrated to it. Once the most secure CSP is identified for a given application, the proposed framework performs a cost-benefit tradeoff analysis in terms of the security dispensed and service costs to support the formation of an ideal cloud migration plan. 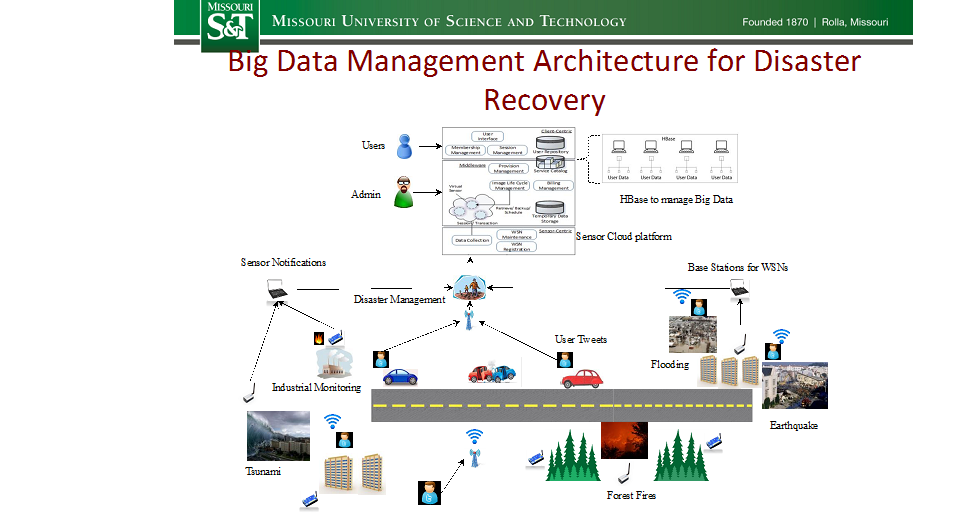 PROJECT DESCRIPTION
Efficient management of natural and man-made disasters poses technical challenges like energy efficient collection of sensor data, optimizing the network bandwidth, faster analysis of the past data/events and dissemination of timely and correct information using Sensor cloud architecture to the people involved in decision-making.

The outcomes from this project is to assist human operators in their disaster management coordination and planning like directing a medical physician’s team to their nearest cluster of affected people in a region and administer medications as necessary or finding a safe route for evacuation of affected people. Sensor data integrated with microblogs such as Tweets help identifying some local events and people sentiments, which is significantly useful in handling/understanding disaster situations. It will also benefit other applications such as real-time tracking of road/driving conditions in vehicular networks.

PROJECT DESCRIPTION
In this project, the focus is to enhance the advanced Information Management (IM) services. There is a need to further improve the exchange of information through message delivery between enterprise and the tactical edge networks and applications, the information management services need to be capable of operating in contested/congested environments and be built upon disruption and fault tolerant techniques and technologies. The objective is to develop and demonstrate opportunistic delay or disruption tolerant networks (DTNs) for rapid access to ISR and to support hybrid and decentralized IM services across enterprise and tactical network infrastructures to enable effective information exchange for shared situational awareness. This will bridge the gap between low bandwidth and high bandwidth data producers and consumers and provide the ability to discover and share data across disparate systems under GOT-IT architecture. In this environment, thus, priority of messages, intelligent caching of mission critical messages using incentives, higher message delivery of unique messages as well as reducing the network traffic is very important for the mission.