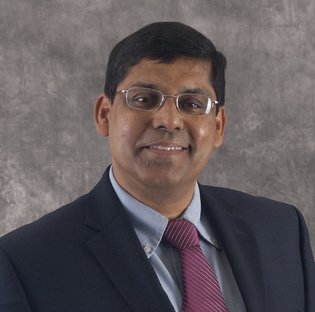 Dr. Sajal Das, an IEEE Fellow, is a professor of Computer Science and Daniel St. Clair Endowed Chair in Computer Science at Missouri University of Science and Technology, Rolla. Prior to September 2013, he was a University Distinguished Scholar Professor of Computer Science and Engineering at the University of Texas at Arlington. During 2008-2011, he was a Program Director at the NSF in Computer Networks and Systems Division in the CISE Directorate. In 2012, he was selected as the E.T.S. Walton Fellow by the Science Foundation of Ireland. Dr. Das has visited numerous universities worldwide for collaborative research and is frequently invited as keynote speaker at international conferences. His research interests include wireless sensor networks, mobile and pervasive computing, cyber-physical systems, smart environments including smart healthcare and smart grid, big data analytics, IoT, distributed and cloud computing, security, biological and social networks, and applied graph theory and game theory. Dr. Das has directed numerous funded projects and published more than 650 research articles in high-quality journals and refereed conference proceedings. He holds 5 US patents, co-authored 52 book chapters and four books titled Smart Environments: Technology, Protocols, and Applications (2005), Handbook on Securing Cyber-Physical Critical Infrastructure: Foundations and Challenges (2012), Mobile Agents in Distributed Computing and Networking (2012), and Principles of Cyber-Physical Systems: An Interdisciplinary Approach (2017). 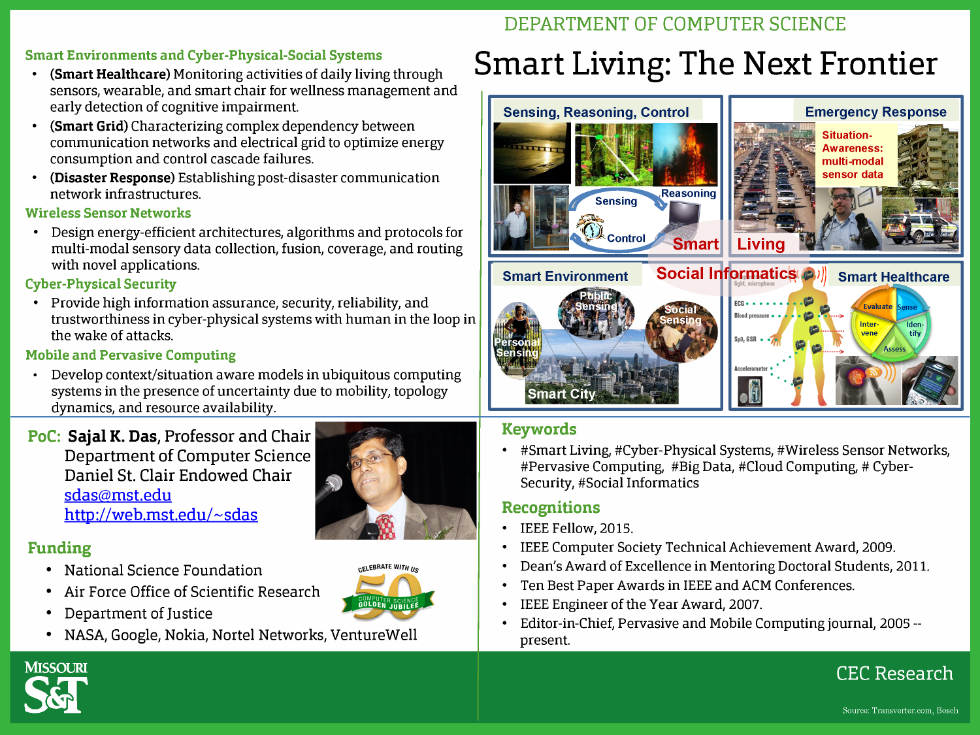 PROJECT DESCRIPTION
The goal of this project is to design, implement, and evaluate in-home techniques for generating reports of activities and social interactions that are useful for monitoring well-being and for automating intervention strategies for persons with dementia. The plan is to design machine learning techniques that make effective use of sensor data to perform automated activity monitoring and prompting-based interventions that are beneficial for the residents as well as for their caregivers and family. The environment is human-centric because it learns information about its human residents and uses this information to provide activity-aware monitoring and intervention services. By transforming everyday environments into smart environments, many older adults with cognitive and physical impairment can lead independent lives in their own homes. A key component of this project is an evaluation of the technologies in actual homes with volunteer older adults and thus will assess the technologies for acceptance with the target population.

PROJECT DESCRIPTION
The objective of this collaborative project is to understand, study and analyze in a holistic manner the vulnerabilities of smart grid system due to intricate interactions with the communication networks. Specific goas include: (i) investigating a wide variety of attacks, misconfiguration, malfunctioning, and failure scenarios in the communications networks, and characterizing their impacts on the smart grid; and (ii) designing a multi-level security framework based on robust state estimation and trust model that hardens the grid against malfunctions and attacks from the communications side, thus preventing cascade failures.

PROJECT DESCRIPTION
Organisms adapt to external perturbations through optimized structure of their gene regulatory networks (GRNs). In the long-term, the state transition network of a GRN converges to a set of attractors that make the organism resilient to removal or functional impairment of genes. In wireless sensor networks (WSNs), such attractors refer to a group of sensors serving as sink nodes for packets sent over multiple hops. This project maps such attractor based genomic robustness onto WSNs to infer optimal topologies and routing strategies that mitigate both sensor failure and a noisy wireless channel. This is being achieved by conducting experiments in silico gene by simulating the functional removal of a gene from sample GRNs, to understand the dynamics of the attractor state space. This information is next used to design WSN topologies and routing protocols that are resilient to network uncertainty, node breakdown and compromise. This project also pursues the design of optimal wiring rules between sensors in a robust WSN that guarantees maximum probability of successful packet transmission under a given routing strategy. Validation and testing are accomplished on real life WSN testbeds.

PROJECT DESCRIPTION
The goal of this project is to create a novel architecture-independent framework for designing efficient, portable and scalable parallel algorithms for analyzing large-scale dynamic networks, such as social networks, biological networks, and disaster networks. The basic idea is to exploit graph sparsification techniques to divide the network into sparse subgraphs (certificates) that form the leaves of a sparsification tree. This innovative approach leads to the design and analysis of efficient parallel algorithms for updating dynamic networks, and reduction of memory latency associated with parallelizing unstructured data. Specifically, parallel algorithms will be designed for maintaining network topological characteristics and updating influential vertices and communities. The portability and performance of algorithms will be demonstrated via implementation on distributed memory clusters, shared memory multicores, and massively multithreaded parallel computers.

The objective of this multi-university collaborative project is to develop an innovative modeling framework and tool suite for assessing complex threats from natural and sentient adversaries in the management-coupled cyber- and physical- infrastructures (MCCPIs) with a human in the loop. Specific goals include: 1) modeling the hybrid, stochastic, and multi-layer dynamics of MCCPIs; 2) characterizing different types of adversaries and develop trust models to deal with data falsification; and 3) building effective strategies for threat and vulnerability assessment and subsequent mitigation. The developed tool suite will be applied to air transportation system with a goal to provide situational awareness of the propagative impacts of threats across networked physical-, cyber-, and human elements.