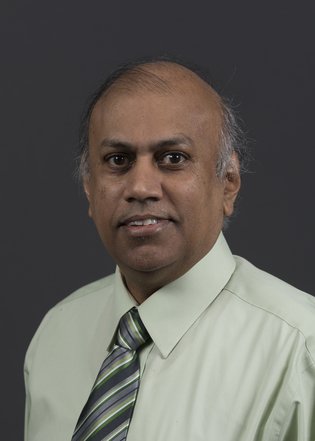 Dr. Jagannathan Sarangapani is at the Missouri University of Science and Technology (formerly University of Missouri-Rolla) where he is a Rutledge-Emerson Distinguished Professor of Electrical and Computer Engineering. He served as a Director for the NSF Industry/University Cooperative Research Center on Intelligent Maintenance Systems for 13 years.  His research interests include learning, adaptation and control, secure human-cyber-physical systems, prognostics, and autonomous systems/robotics.

He has coauthored 180 peer reviewed journal articles, 289 refereed IEEE conference articles, written several book chapters, authored/co-edited 6 books, received 21 US patents and one patent defense publication. He graduated 30 doctoral and 31 M.S thesis students. He was a co-editor for the IET book series on control from 2010 until 2013 and now serving on many editorial boards including IEEE Systems, Man and Cybernetics, IEEE Transactions on Neural Networks and Learning Systems and others.  He received many awards including the 2018 IEEE CSS Transition to Practice Award, 2007 Boeing Pride Achievement Award, 2001 Caterpillar Research Excellence Award, and 2000 NSF Career Award, has been on organizing committees of several IEEE Conferences. He is a Fellow of the IEEE, National Academy of Inventors, and Institute of Measurement and Control, UK and Institution of Engineering and Technology (IET), UK.

PROJECT DESCRIPTION
Many real-time systems such as smart grid, automotive control systems are implemented as distributed event triggered control systems wherein the control loops are closed through a real-time communication network with limited resources. Such systems are referred to as Network Control Systems(NCS) or Cyber-physical Systems.  The interest for NCS is motivated by many benefits they offer such as the ease of maintenance and installation, large flexibility and the low cost. Adding resource constrained communication network in the feedback control loop, however, brings challenging issues which have to be investigated before the above ‌benefits are harvested. The network imperfections such as time-varying delays, packet losses, quantization, and limited network resources can degrade the performance of control systems and they can even destabilize the system. Therefore, the optimal event triggered controller design of NCS in the presence of event-based sampling has to be investigated.

Therefore, the goal of this study is to provide time-based online adaptive critic event triggered ADP controllers forward-in-time, without utilizing policy and value iteration, but with adaptation, optimization, and learning for the control of unknown linear and nonlinear NCS, has guaranteed performance, and is supported by a rigorous and repeatable design and mathematical framework.

PROJECT DESCRIPTION
In this project, the following objectives will be addressed:

PROJECT DESCRIPTION
This effort involves development of monitoring, diagnostics and prognostics algorithms for a class of nonlinear systems.  Both data-driven and model-based schemes are being developed as part of this effort.  Online approximators such as neural networks, artificial immune systems are being considered for approximating the fault dynamics.  Fault accommodation schemes are being designed by controller reconfiguration.

PROJECT DESCRIPTION
This effort involves successfully developing controllers for a class of nonlinear systems with potential applications to power, assembly of MEMS and Nano devices.